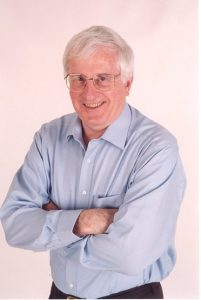 Thomas W. Warke graduated from Hudsonville High School in 1958 as co-valedictorian, an accomplished athlete, and an involved member of his student council and National Honors Society board. Upon his graduation, Thomas (Tom) accepted the General Motors National Scholarship, which he used to pursue his bachelor of arts degree from Kalamazoo College in 1962. From there, Tom’s love of learning, specifically economics, would take him around the globe.

His studies brought him from Kalamazoo to Universität Köln as a Fullbright Scholar and shortly after to Princeton to obtain his PhD. But learning was not his only passion. Tom spent many years within the classroom as an educator as well, teaching economics at the University of Kent in Canterbury, the University of Zambia, Aquinas College, Grand Valley State College, the American University in Cairo, Sheffield University, Cambridge University, Johns Hopkins University, and Hopkins-Nanjing Center. Throughout this time, Tom published a number of essays related to his field and was invited to speak on multiple occasions to lend his expertise.

Now retired, Tom has begun pursuing the field of journalism, specializing in economic subjects related to The Global Financial Crisis of 2008; Redistributive Taxation; and Contemporary Populism and Populism in 1880-1910 America.