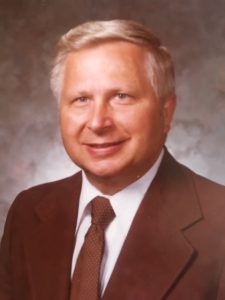 Howard Perrin has been an upstanding citizen of Hudsonville over the years, and he has helped the community in many unforgettable ways.

In 1959 he became involved with the Little League Baseball program. Then he helped arrange to have hundreds of little league players transported to Detroit Tigers games where they often experienced their first Major League Baseball game. Some even saw the great Al Kaline playing right field in his prime. Howard spent 22 years with the program.

Howard started the Hudsonville Athletic Boosters in 1970 upon request of then Athletic Director Bob Waite. At the time, the school was hoping to pass a big millage increase to build a new football stadium behind the High School. The millage passed and Howard was able to get over 100 people out for a sod laying party to save the school $3200. In 1977, Howard anonymously purchased the first Eagle mascot costume out of Chicago. There was a tailgate party in the school parking lot followed by a parade through the town with the new Eagle making its debut in a fancy antique sports car. The eagle then went on to Middleville where Hudsonville was playing for the league championship. Hudsonville won the game 22-18. Howard’s comment on the current eagle mascot, “…he sure looks skinny – must be they are not feeding him well.” 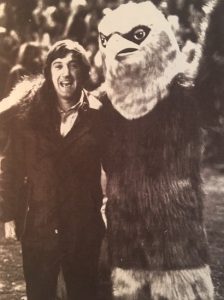 Howard started Hudsonville Cub Scout Pack 3148 in 1965. The program has, to date, seen hundreds of youth into Boy Scouting and many have earned their Eagle rank. Of note: Howard designed something new in 1966 that involved sections of eavestrough where the young Cubs would sail squares of wood made into sailboats by blowing through a straw. Scouting Magazine caught “wind” of this and for the past 53 years Cub Scouting across the nation has run the “Rain Gutter Regatta.”