The 2013 Innovation in Education Award was presented to Dorothy Groetnhuis and Lois Atkins of Riley Street Middle School. 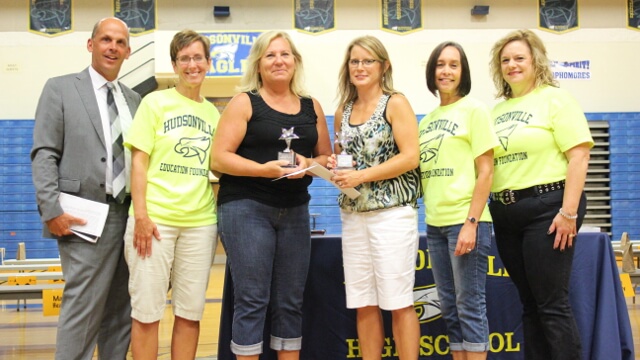 This year our award is actually going to two teachers – not because they tied in the voting but
because they were nominated as a team. Our 2013 Innovation in Education Award goes to Mrs. Dorothy Grotenhuis and Mrs. Lois Atkins from Riley Street Middle School.

These two educators have shown a willingness to try many new ideas in order to engage their
students. They have successfully piloted a Project Based Learning, team teaching format where they have integrated 8th grade History and ELA together. They are innovative on numerous fronts from using iPads in the classroom to holding a re-enactment of the 1889 Oklahoma Land Rush. They also include an invention unit during their study of the American Industrial Revolution where every student has to come up with a contemporary invention and present it in a “Shark Tank” format before adult professionals.

Their largest project is during the Civil War unit where they place every student in a real Civil War regiment. The students have to choose one person from their regiment to research along with studying their regiment as a whole. The regiments all present what they’ve learned, in character, at an event called Showcase – an open house format for parents. Showcase is followed up the next day by the much anticipated Rocket Day: a re-enactment of Civil War battles using bottle rockets made in Science class.

Mrs. Grotenhuis and Mrs. Atkins are two truly gifted educators. Their innovative teaching has been featured three times in the Grand Rapids Press and MLive. Hudsonville Education Foundation is honored to present them with this award.

The Grand Rapids Press has written about the recipients three times. You can view the articles at the links below.

The Advance Newspaper also published the official announcement of the award recipients. You can view the announcement here: September 10, 2013: Hudsonville teaching team honored by educational foundation